Trapped in The Land of Shadow 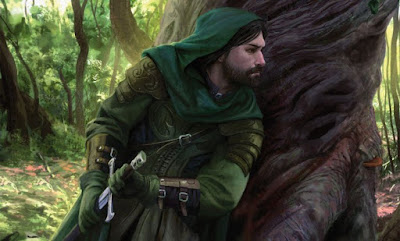 A new preview has been released for the upcoming Saga Expansion, The Land of Shadow.  In the article, two new heroes are spoiled, a new Faramir and Damrod. 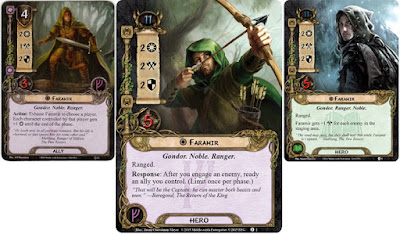 Faramir has the ability to ready an ally after engaging an enemy.  Immediately, I think of tactics Aragorn, which I have already shown an affinity for.  After Aragorn kills an enemy and pulls another over, Faramir can ready an ally to help with attacking.  Alternatively, if you have scout or ranger allies in play, engaging an enemy to trigger both Faramir and Expert Trackers allows you to exhaust and immediately ready the same ally. 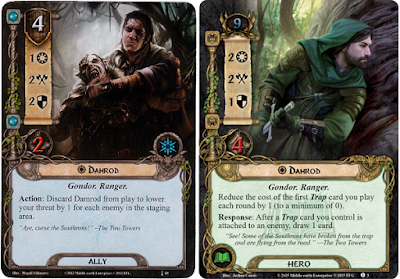 Ally Damrod was never a card that I found a lot of utility, to the point where I don't think I have included him into any decks.  The new hero version has synergy with trap cards. Previously, there were only four different trap cards available to the card pool, with another one spoiled in this article.  His passive ability to lower the cost of the first trap played gives lore some much needed resource smoothing, and card draw is never a bad thing.  Unfortunately, with the exception of Forest Snare, all traps are added to the staging area unattached, so more than likely you'll be getting your card draw during staging rather than planning.  Damrod's ability also gives OG Anborn some added utility, as you can continue to recycle your traps and card draw. 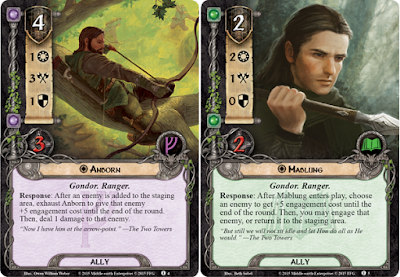 Two new allies of familiar faces were introduced in this article, both of which deal with increasing engagement cost.  In Mablung's case, he gives you the opportunity to pull an enemy or send it back to the staging area.  For Anborn, his ability allows you to place some direct damage on an enemy, which could be helpful running alongside Thalin.  Recently, I was playing The Ring Goes South, and I would of loved to snipe some Crebain from Dunland as soon as it entered the staging area.  Combined with Faramir, Anborn could still be readied to take advantage of his three attack.  Speaking of attack, pair him up with Boromir and he's attacking for four!  In the case of either ally, their ability to increase engagement cost is very helpful for late game use of either Pippin or Dagger of Westernesse. 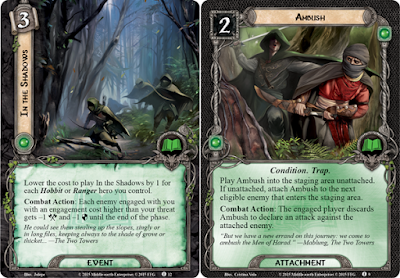 The last two cards spoiled in the article are lore cards, continuing the ranger synergy.  In the Shadows is probably one of my favorite cards of the article.  As anyone who has watched my recent YouTube videos, I am a fan of my Aragorn/Pippin/Merry deck, and this card will definitely find a spot in the deck.  The deck attempts to stay low in threat, so that it can take advantage of Pippin and Dagger of Westernesse, and being able get addition utility by reducing enemies' attack and defense by one is clutch.  Combined with Aragorn, all enemies are at two less defense, and Straight Shot gets even better.
Ambush is an interesting attachment.  It basically works like Quick Strike but at one cost more, and less reliably.  Just like other traps, a bit of encounter deck scrying, such as Rumour from the Earth or Palantir, helps to determine if there is a good target for the trap.  Nothing hurts more than trapping a weak target such as Eastern Crows.  I suppose if you don't have access to the tactics sphere, this does give the opportunity to drop an enemy before it has a chance to attack you, so in that case, it also acts a bit like Haldir.
Overall, the cards in this article show a lot of promise and utility across a variety of decks.  The Land of Shadow is still listed as in development, so we more than likely still have a bit of a wait, but I can already tell it will be worth the wait. 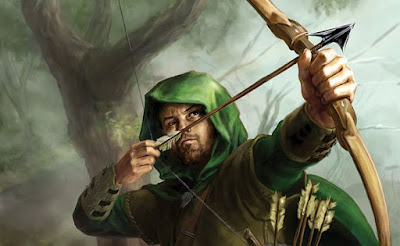