Today, an interesting card appeared on my Twitter feed.  A spanish LOTR blog released a supposed spoiler for an upcoming card.  Custodio de la Casa del Manantial, roughly translated to Custodian of the Spring, is a new Ent ally. 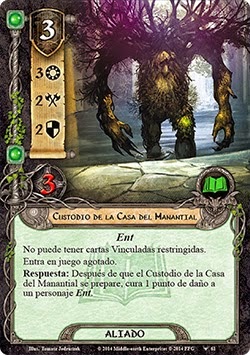 His text translates to: "Cannot have restricted attachments.  Enters play exhausted.  Response: After the Custodian of the Spring readies , heal 1 point of damage on an Ent character." The effect sounds very similar to Silvan Tracker, though more limited. There will definitely be synergy with the recently spoiled Treebeard hero, who gains willpower and attack by dealing himself damage. I hope this card turns out to be real, and if so, look forward to adding him to my Ent decks.
Posted by Chris at 4:27 PM

Email ThisBlogThis!Share to TwitterShare to FacebookShare to Pinterest
Labels: spoiler