Impressions - The Lost Realm - Events, Attachments, and Side Quests 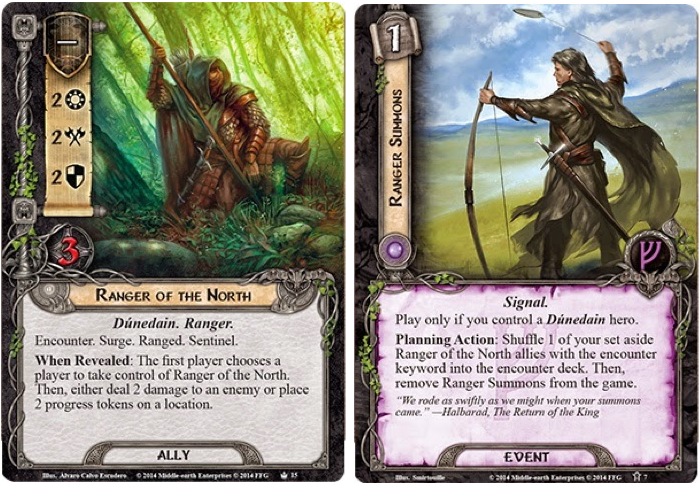 There are three event cards in The Lost Realms, with spirit missing a card.  Tireless Hunters is what I call a "soft" version of feint.  During combat, you're able pull an enemy over to you, and if it has been dealt a shadow card, then it is removed.  This could be used to move an enemy from another player that isn't set up to defend an attack, or even bring an enemy down from the staging area.  Back in the core set days, the Hill Troll in Journey Down the Anduin could be a daunting enemy.  It was common to forest snare him until you could deal with it.  Unfortunately, you either had to spend a feint, or deal with his 6 attack for at least a round.  In this case, you could use this card to pull him down after enemies have attacked, then snare him during the next turn's planning.
Expert Trackers reminds me of Strength of Will. Instead of a static amount of progress, you are able to place progress on a location relative to the threat of an engaged enemy.  There's not much to say about it, it's solid.  As long as you have a deck with a good number of scouts or rangers, I don't see a reason not to include it to help with location control.
Ranger Summons is the card that got me excited for this expansion.  First off, it's a signal card, so it has synergy with our new watchman.  For one cost, this card places a ranger ally into the encounter deck.  I have to imagine that this was inspired by The Massing at Osgiliath's Ranger of Ithilien.  It can do damage to an enemy, or put progress on a location, then you get to give it to whichever player needs him most.  Solid stats for the cost, but I wish it would of had a shadow effect, like the Ranger of Ithilien.  Perhaps that would of been overpowered.  Regardless, I'm very happy with this card, and I can tell from my initial playthroughs that it is very satisfying to see them come up during staging. 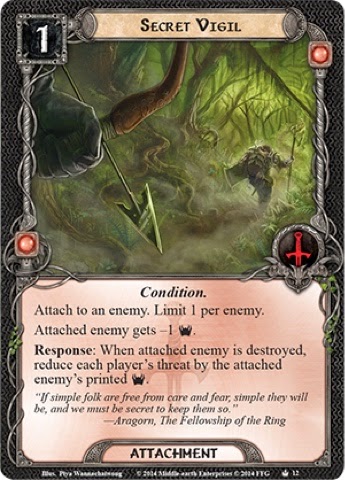 Heir of Valandil reminds me of O Lórien!  To fit in with the Dúnedain trait, instead of being a static reduction, it is relative to the number of engaged enemies.  I imagine it will be good as we get through the cycle and fill out the number of Dúnedain allies.  I don't see any value, however, in a mono-leadership deck, considering the amount of resource acceleration available.
Secret Vigil is my favorite attachment from the expansion.  It provides a lot of utility that isn't available in tactics, particularly threat reduction, both enemy and player.  There was a core set card, Power in the Earth, which had similar effects, but for location.  It didn't, however, provide any additional utility beyond reducing the threat in the staging area.  It fits right into what tactics is meant to do, and not only benefits the player who played it, but each player.
When I saw Athelas, the first thing I did was pull up the quest cards for A Journey to Rhosgobel, to see how it was written about the Athelas objective cards.  These can't be used to for the last quest card in AJtR, but it could still heal Wilyador earlier in the quest.  My second thought was relating it to lembas, another recent lore attachment.  Where as that only healed three hit points, and readied the character, this heals all damage and removes a condition.  Not having a cap on healing isn't as big of a deal for me, as the most you would typically heal is four, but I'm always happy to have more condition removal.  Also, it doesn't have to heal the character its attached to, so there's flexibility there.  Unfortunately, you have to exhaust the attached character, so you use up their utility in exchange for the healing.  A small inconvenience for sure, but there's plenty of value to make up for it.
Star Brooch is a solid questing boost.  As opposed to The Favor of the Lady or Dúnedain Quest, which both cost two, for one you get the same boost, and it cannot be reduced.  The only trade off is limit one per hero, and you have to put it on a Dúnedain or Noldor hero, but that still opens it up to plenty of valid targets, such as Idraen or Glorfindel.  This attachment would come in very handy in quests where there are willpower reduction conditions, such as Black Breath. 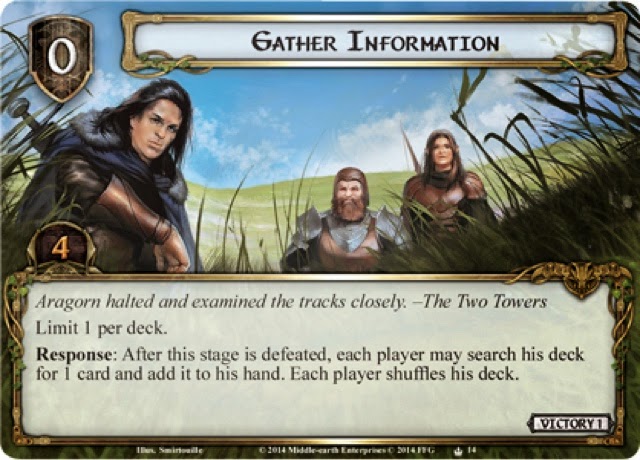 A new addition to the player card line up, side quests allow for the players to take a break from the main quest for some added benefit.  Similar to The Battle of Five Armies, players decide which quest card they will take on, and then quest against that.  Not only do you get the benefit of the side quest, but it could also be useful in quests where you don't want to progress too quickly, such as Conflict at the Carrock, where you usually want to build up before taking on the trolls.  The only neutral card in The Lost Realm is a side quest, Gather Information.  Limit one per deck, it allows the players to search their decks for a card of choice, and add it to their hand.  Similar to Word of Command, being able to pull those key cards from your deck could be game changing.  In the quests included with The Lost Realm, there are various effects which can penalize you for how many quests are in play, but for all previous quests, I don't think there's any negative to include this.

Looking at the new cards as a whole, I'm very excited for where the designers are taking the game.  None of the cards drastically change the way the game is played, but they all give the players new options to explore.  Regardless if you build a Dúnedain deck, a lot of the cards can be included in older builds.  I look forward to testing out these cards in future plays.  What do you guys think?  What is your favorite card?  Are there combos that I didn't mention that merit further exploration?
Posted by Chris at 11:30 AM