On Saturday, a boat sailed to my home from Westernesse, carrying with it the last of the Edain.  Along with it, the promise of adventure in the lands north of the Misty Mountains.  The Lost Realm is in our hands, and what does that mean for the game? 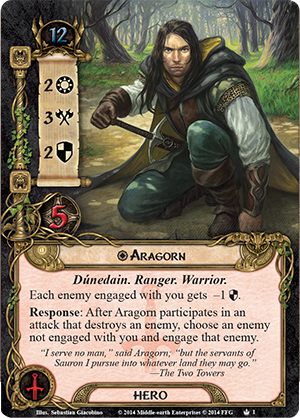 Two heroes are included in the deluxe expansion, Aragorn and Halbarad.  Aragorn is no stranger to LOTR players.  This marks version 3 of the hero, with a fourth, fellowship version coming soon in Treason of Saruman.  Same states as before, but different text.  Still Dúnedain and a ranger, but this time he also has the warrior trait. This is very useful for him as a tactics version, which synergizes with attachments which require warrior heroes, such as Captain of Gondor.  He is combat focused, reducing all engaged enemies' defense by 1.  Including Aragorn with Bard in another deck, or Legolas with a Rivendell Blade, you have the potential to reduce defenses by 3.  Combined with Unexpected Courage or Rohan Warhorse, and you have a killing machine. 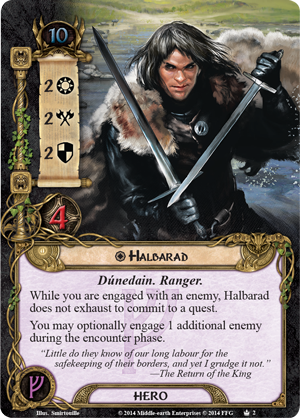 Halbarad was Aragorn's second-in-command of the Dúnedain, and was among the rangers who guarded the Shire prior to the War of the Ring.  I like heroes at 10 threat, such as Elladan and Elrohir, and has identical stats to fellow Dúnedain, Beravor, as well as Mablung.  Since the Dúnedain trait is showing a lot of engagement effects, Halbarad should be able to commit to the quest frequently without exhausting.  With the ranger trait, he has synergy with a lot of the lore cards related to rangers, such as Wingfoot.  In fact, Wingfoot would work well with Halbarad, as a back up, in case there aren't any enemies currently engaged with him.  Halbarad's built-in action advantage could be a replacement for, or addition to, other leadership heroes, such as Aragorn, without having to spend resources, or Prince Imrahil, without a character leaving play.  During combat, he could be combined with Gondorian Fire or Blood of Numenor to up his offensive or defensive ability, respectively.

To jump start your Dúnedain decks, The Lost Realms includes four Dúnedain allies.  Starting with the Weather Hills Watchman, his ability is similar to that of Galadhrim Minstrel or Westfold Horse-breeder.  Currently, there are five signals, one of which will be discussed below, and all in the leadership sphere.  I'm interested in dusting off old favorites such as Dúnedain Mark, with the ability to scry for them.
Dúnedain Hunter is interesting in the fact that it is the first zero-cost ally.  The trade-off is having to search for an enemy, and possibly losing the ally if you don't see one.  Of course, if you're embracing Dúnedain, then having an enemy engaged with you is not a bad thing, plus the fact that you get to choose which enemy engages you when you search.  This could be very helpful in finding an enemy that you don't want popping up in staging.  In the event that you don't find an enemy, if you have Horn of Gondor on the table, you're at least up one resource.
Sarn Ford Sentry is not bad, but I'm not excited about.  For three cost, it's nice to have 2 willpower and 2 hit points.  Unfortunately, it is Dúnedain and scout, and not ranger, which would synergize with other ranger cards from the lore sphere.  Depending on how many enemies are engaged, it could result in significant card, but there are so many cheaper card draw effects, such as Mithrandir's Advice or Deep Knowledge, that I can rely on how much I can draw, I don't think I would rely on the Sentry for its effect.
Finally, we have Warden of Annúminas.  What to say about this card?  For four cost, I can't help but think of another Dúnedain: the classic Northern Tracker.  Both cards have two attack, two defense, and three hit points, but Northern Tracker has a static one willpower, where Warden of Annúminas, and his card effect is that he has +1 willpower for every enemy engaged.  This ties into the Dúnedain trait, but it still feels expensive for an unreliable effect.

Out the gate, FFG has given us a good set of characters to flesh out the Dúnedain.  For the most part, the cards are good, with a few that aren't bad, but I'm lukewarm, at best, over.  One thing I am interested in is looking how many enemies we will have engaged with us at a time.  Obviously, the more you have engaged, the better many of these card effects become, but I am concerned that this will lead to getting overwhelmed.
In the next Impressions segment, I will go through the other players card: events, attachments, and the new card type, side quests.
Posted by Chris at 11:31 AM