A Call to Arms

The Treason of Saruman is shipping now.  We've already had a preview of some of the cards and quests, but now we given a look at the heroes we will be getting.  We already knew about our new Fellowship hero, Aragorn v4.  Now we have our two other heroes: Théoden and Treebeard! 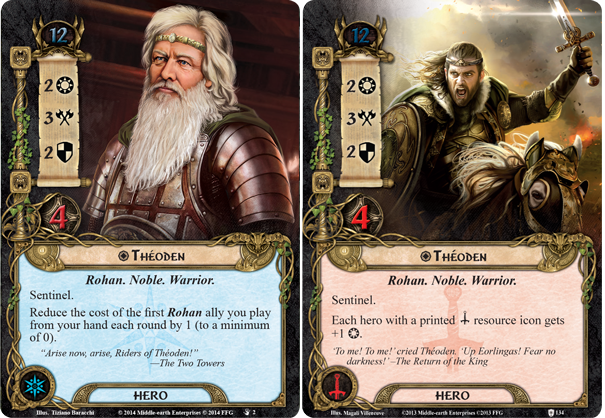 Many people online were predicting a new version of Théoden, considering the source material.  Personally, I had completely written off a hero version of Treebeard when we got the ally version in the last cycle.  As it stands, I'm more excited for spirit Théoden than I am hero Treebeard.  His ability to boost willpower and strength is interesting, especially since there is so much opportunity for in-sphere healing.  Théoden shows lot of promise.  Already being in the same sphere as his niece, Éowyn, shows promise by itself, but his cost reduction should make a lot of the more expensive Rohan cards more viable.

My favorite from this update is Herugtim.  This weapon works well Théoden, either version, or Éowyn.  Add some willpower boost, like Dúnedain Quest, or Éowyn base ability, and you can get some significant attack power.  All in all, I'm excited to get my copy late next week.
Posted by Chris at 11:30 AM